Using maps, compasses, and sextants, mariners in the early 1500’s developed the first methods to navigate the open sea; heralding an age of exploration as humanity set sail for the horizon. Yet long before this time evolution had equipped life on the planet with a biological global positioning system that was far superior to those early navigational tools – the Magnetic Sense. While there is unequivocal behavioural evidence demonstrating that this faculty exists, it is the least understood of all senses. The location of the primary sensors, the underlying biophysical mechanisms, and the neurological basis of the sense are unknown. Currently, there are three ideas that aim to explain how magnetosensation might work: (1) a light sensitive radical pair based model; (2) magnetite based magnetoreception; and (3) electromagnetic induction. Previous studies have asserted that pigeons employ a magnetite containing sensory apparatus located at six specific loci in the subepidermis of the beak. We have shown that this dogma is false, and in reality clusters of iron-rich cells in the beak of pigeons are macrophages not magnetosensitive neurons (Treiber et al, Nature 2012). It is apparent that the true magnetosensors remain to be found.

Our goal is to identify the molecules, cells and circuits that underlie the magnetic sense in pigeons. To achieve this objective we employ an assay that assesses neuronal activation within the pigeon brain, following exposure to magnetic fields generated by Helmholtz coils. These experiments have implicated the vestibular nuclei and the inner ear of pigeons in the magnetic sense, resulting in the discovery of an iron-rich organelle, the “cuticulosome” which resides in avian hair cells (Fig.1. Lauwers et al, Current Biology 2013). 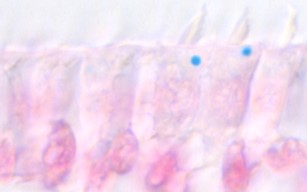 Figure 1: Shows pigeon hair cells stained with Prussian Blue, (which labels ferric iron), and nuclear fast red. A single iron-rich structure is found per a cell,  located beneath the stereocilia in the cuticular plate. For this reason we refer to it as the cuticulosome.

Where are the primary magnetosensors? Having established a physiologically relevant readout for the magnetic sense, we can now ask where do the primary magnetosensors reside. To do so we are employing anatomical perturbations (e.g. hair cell ablation with antibiotics), which we expect will be superseded by genetic methods. We are complementing this work with a systematic search for magnetite within the pigeon inner ear using synchrotron radiation and an elemental characterisation of the cuticulosome.

How is magnetic information encoded in the avian brain? To address this question brain we have built a 2-photon microscope that permits in vivo calcium imaging while exposing pigeons to precise magnetic stimuli. Coupled with a genetically encoded calcium indicator (e.g GCaMP6) delivered by an adeno associated virus we are able to study which components of the magnetic field elicit neuronal activity (i.e. intensity, polarity and inclination) and how this information is integrated into existing neuronal networks. Are there magnetic place cells?

Figure 2: Image showing a whole pigeon brain prior to the iDISCO clearing protocol (left), after bleaching (middle), and following the removal of lipids (right). Coupled with immunostaining and light sheet microscopy this method allows us to globally assess neuronal activation in the pigeon brain.

Funded by: ERC Starting Grant – The Cellular and Molecular Basis of Magnetoreception, ERC Consolidator Grant – The Neurological Basis of the Magnetic sense.